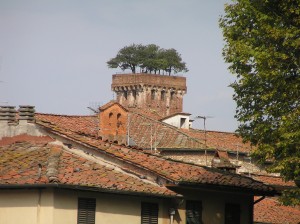 one of the famous old towers, complete with rootop oak trees

The next morning, after a pleasant and varied breakfast (included), I checked out of Il Seminario.

To the left (click to expand) was the morning view from my window.

At his suggestion,  I left my bag in Paulino’s care with the intention of picking it up mid-afternoon and moving on down the rail line to Pisa.

INFO YOU CAN USE – the room rate I’d booked online a few days ago was 90euro (roughly US$130 at the current rate). I had guaranteed the reservation with a credit card. As I was checking out I asked him how much of a discount could I get by settling my account in cash?

“Cash is always better. How about 60euros?”

Wow. 33% off. Eat your heart out William Shattner.

I was not going to try to bargain this down any further. I know The Right Price when I hear it. The possibility (probability is a better word) of a serious discount for cash is common in small hotels and inns all across Italy. I never once failed to get at least 10% taken off. Also, by paying cash, I avoided the currency-changing surcharges that the credit cards add to international transactions. 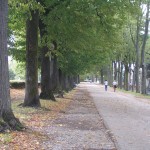 The bike shop did not open until 10am. In fact, few businesses in Lucca open before 10am. I circled the top of walls twice, stopping often to enjoy the ambiance. Then I rode down one of the ramps into the streets, found a bread shop and bought a half loaf of crusty whole wheat bread. A few doors away, I purchased a wedge of cheese.

I also bought a bottle of ice-cold water.

Yes, I know I bragged in an earlier post about the life-extending properties of the Lucca wines wine and how much I consumed. That was simply poetic license talking. I am not a teetotaler, but damn near.

Back up on the ramparts, I found a shaded bench and laid out my “peasant lunch.” (we should all be so poor and deprived). 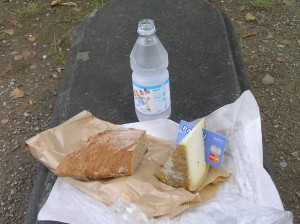 At that point I realized I did not have a knife for the wedge of cheese. American ingenuity to the rescue. The edge of credit card did a nice job of slicing off the rind and making bite-sized chunks of the core.

I then fell asleep with my rented bike propped next to the bench on which I’d stretched out. My camera bag sat in the basket. While I cannot promise anyone that they too can get away with this, I am pleased to say that when I awoke about a half-hour later, everything was as I had left it.

As I continued to ride the streets, I noticed what others have pointed out. Unlike Florence or Venice (shudder), Lucca is a living breathing town, all of its own, that might miss the tourists if they disappeared, but surely would continue on anyway, if there were none.

The tourists are mostly day trippers. Their huge busses do not arrive until 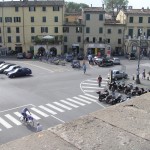 around 10am, dropping them in the plaza directly inside the main gate that pierces the wall. They  are mostly gone by 4pm. After they leave, the restaurants and cafes are not crowded as they are in Florence or Siena.

FYI – the tourist “offices” seen in this photo are private businesses, not the official government Italian Tourism Office. There is one outside the walls, close to the train station.

There is another in the center of Lucca, off Napolean Square.That one includes an Internet Cafe and a coffee shop that also sells snacks, postcards, etc. A private table in the same space books local events.

Either will make a hotel or B-and-B reservation for you, without a service fee and they have a generous supply of maps and flyers covering local events.

There is another TO way up in the far northeast corner of town. I never got there.

After my pleasant nap I realized that Lucca ia the “real experience” I was looking for. I went back to Il Seminario and told Paulino I wanted to stay over.

“Sorry, we are totally booked. But I will find you a place.” And he did.

“Lucca In Centro B & B” is on a quiet square a few minutes away on the bike. I think they have maybe 6 rooms or so, each named after a Saint. For the next night two nights I slept with St. Peter.

Nothing fancy. It has a seriously mis-leading web site. My room was nowhere near the luxury and appointments in the site’s photos. Had I booked it based on the web site, I would have been justified in feeling lied to by artfully deceptive photos.

But it was clean, quiet, modern bathroom, decent small breakfast included. Not air conditioned, but the fan was enough at this time of year. The free, unlimited and open WiFi actually worked without any of the multi-step login nonsense that so many other places have bought into (and charge outrageous prices for, as well). It was a place to sleep.

That night, there was a choral concert inside the walls of the city and it echoed hauntingly all around the area. By then I’d returned the bike but the town is so compact that I never needed it again. I timed my casual stroll from one side of Lucca to the other at just under 30 minutes.

There were many other musical and cultural events that bespoke Lucca’s rich heritage. Another concert I attended, one of the ongoing (every night of the year) Puccini festival concerts (17 euros), was excellent. It started early and ended at 8pm. I was able to go to dinner and then attend another (free) concert of modern religious music at 10pm.